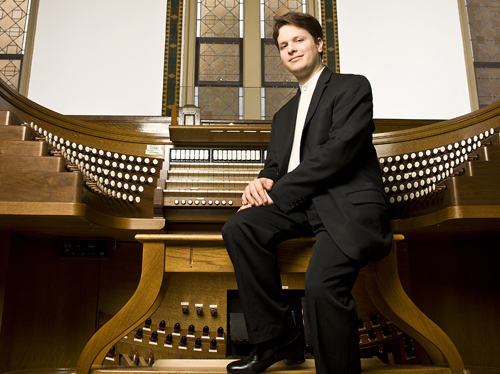 If you’re tired of  boring, uninspiring organ playing, or thought that was the only kind there was, or have never experienced rock-solid dazzling classical organ music and would like to broaden your musical world, mark your calendar for this performance at Hayes Barton United Methodist Church on Sunday afternoon, September 9 at 3:30. This will be a dedication recital for the church’s new 52-rank Buzard pipe organ.

Listen to Him Play:

Called “precisely what the organ scene needs right now” by the Los Angeles Times, Grammy Award-winning organist Paul Jacobs has been lauded by critics and audiences alike for his tremendous technical abilities and for the wide range of emotions he is able to coax from the instrument. First receiving acclaim for his sweeping marathon performances of the complete works of Bach and Messiaen, Jacobs has proven himself a tireless advocate for new organ works and core repertoire for nearly two decades.

Jacobs’s career began when, at the age of 15, he was appointed head organist of a parish of over 3,000 families in his hometown of Washington, Penn. After graduating from the Curtis Institute of Music, where he double-majored in both organ and harpsichord under the tutelage of John Weaver and Lionel Party, Jacobs began his professional career with a splash: he made musical history at the age of 23, when he played Bach’s complete organ works in an 18-hour marathon performance on the 250th anniversary of the composer’s death. Two years later, while completing graduate studies at the Yale School of Music with Thomas Murray, he would perform the complete organ works of Olivier Messiaen in marathon performances throughout the U.S. At 26, Paul Jacobs was invited to join the faculty of the Juilliard School, and in 2004, at age 27, was named chairman of the organ department, one of the youngest faculty appointees in the school’s history. 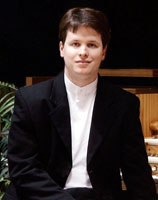 In the 2011-2012 season, Jacobs joins Michael Tilson Thomas and the San Francisco Symphony at Davies Hall and at Carnegie Hall’s Zankel Hall for the American Mavericks series and at the University of Michigan, Ann Arbor. With the San Francisco Symphony, which also presents him in recital this season, Jacobs will perform the Lou Harrison Concerto for Organ with Percussion Orchestra and a new work by Mason Bates. Another new work, by Michael Daugherty, will be performed by Jacobs with the Pacific Symphony. Jacobs plays recitals throughout the U.S., including engagements in Nashville, Houston, Washington D.C., Denver, Birmingham, Los Angeles, and Minneapolis. The Pittsburgh orchestra will present him in recital, and Jacobs will perform with the Kansas City Symphony. The same week, the Kansas City Symphony will present Jacobs playing a solo concert.

Highlights from the 2010-2011 season included re-inaugurating the restored Kuhn pipe organ in Lincoln Center’s Alice Tully Hall, performing Bach’s monumental Clavier-Übung III; joining Michael Tilson Thomas for performances of Copland’s Organ Symphony with both the Chicago and San Francisco symphony orchestras; and appearing with the SFSO at both Davies Symphony Hall in San Francisco and the Lucerne Festival in Switzerland. He also joined with living legend Pierre Boulez and the Chicago Symphony for Janácek’s Glagolitic Mass. In Cincinnati, Jacobs was delighted to perform the Janácek with the Cincinnati Symphony under the baton of James Conlon. His recording of Messiaen’s Livre du Saint Sacrement was released by Naxos in September 2010 and received a Grammy Award in the category of Best Instrumental Soloist Performance (without orchestra). This marks the first time in its history that an organist has won this award. 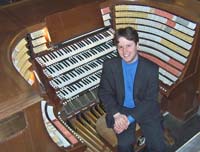 In addition to his concert and teaching appearances, Paul Jacobs is a frequent performer at international and national festivals, and has appeared on American Public Media’s Pipedreams, Performance Today and Saint Paul Sunday, as well as NPR’s Morning Edition, Robert Schuller’s Hour of Power from the Crystal Cathedral and ABC-TV’s World News Tonight, among others. He recently performed for an NPR Tiny Desk concert, filmed behind host Bob Boilen’s desk at the NPR offices.